A Page from a Writer’s Notebook (with explanations)

Picking up a notebook this morning I noticed it was already used — pages of notes from an unfinished novel as well as from THE BADGER KNIGHT. I thought it might be fun to explain a page from my notebook. This one is late in the process of THE BADGER KNIGHT, a draft nearly complete but with various elements to clarify:

Starting from the top….

What is his greatest fear? This is a question I ask about all my characters. Sometimes there are multiple fears or I’m still thinking about which one is the greatest.

Insert Donald trying to give him/them oatcakes from his bag. (The page numbers indicate a couple of scenes where this could be inserted.) This was an anecdote to reveal his kindness.

What is Adrian going for? How is he different at the end of the novel than when we first meet him? What is the psychic change in him and how has it come about? These are overall questions that require my reading through the entire draft in order to check if the answers are there.

What does Adrian want? And why? What is he scared of? And why? These are constant reminders to myself to be aware of what’s driving my character.

Hugh could bring oatcakes from Donald to bank of stream OR p. 197 D tries to give them oatcakes + they have awkward realization he’ll need them for battle. (Again, page numbers indicate scenes for possible insertion.)

Work thru the final phase: A+D going to Scotland for the climax. At this point in the process I obviously hadn’t finished Adrian and Donald’s journey.

keeper/warden  Need to explain about warden/marches  Decide whether Sir Reginald is a keeper or a warden? Has Donald heard of him? Does he know he’s corrupt? Here I knew I had to explain the way the border areas (marches) between England and Scotland were governed in 1346, the time of the novel. I wanted to keep consistent language and decide if Sir Reginald (a bad guy) was a minor governor (keeper) or major (warden). I also had to decide if Donald knew that Sir Reginald was corrupt (he does).

whistle/flute  vellum/paper  shoes/boots  These are notes to myself to search the document for these terms in order to be consistent about usage. If I called Donald’s instrument a whistle at one point, I don’t want to refer to it as a flute later or it’d be confusing.

make clear that D is hit on back of head / in the arm (bleeding) in battle scene Here I had to decide what his injury was.

need to insert SOMETHING more about lepers–that unholy 3 stone Thomas  Since Adrian disguises Donald as a leper in an attempt to get him through enemy lines I needed to keep the theme of lepers present by having the bullies in Adrian’s village (the “unholy trinity”) throwing stones at their local leper, Thomas.

hears wind + it sounds like it’s saying “Ailwin,” telling me I’m as useless as that poor man  Sometimes I slip into the voice of my character when I’m writing my notes.  🙂

When I completed a task, I checked it off or crossed through it.  Sometimes, I don’t use all the ideas so they may be left unchecked. Or, if it’s the last element on the page that I’m actually going to incorporate into the story (like making clear where Donald’s injury is) then I don’t bother crossing it off because it’s time to flip to the next page of notes.

Every writer’s process is a little different but we all have to work through edits and revisions. That’s what helps to perfect a story so it can make it to the printed (or electronic) page. Happy writing (and revising)! 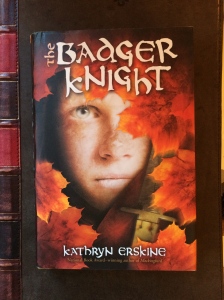